Recently I visited Las Vegas, Nevada where I stayed at  The Venetian Resort Hotel Casino.  The Venetian is the largest hotel in the world with over 7,000 suites.  My wife and I are big gamblers too.  We each play with five bucks.  She doubled her money, netting a whopping $10.00 and then cashed out.  I lost every penny.  Ouch.  My money was gone and I had to find something to fill the time.  It was while reading the Venetian's brochure that I got fascinated with the man behind the scenes, the creator and major stakeholder of the Venetian, Sheldon Adelson, aka The Man Who Stole My Five Bucks!
Some facts about Sheldon Adelson:
Sheldon Adelson Used To Be A Court Reporter
That's right!  I discovered this little tidbit, ...Adelson later dropped out of City College in New York City to become a court reporter.  I couldn't believe my eyes!  This man had originally been a court reporter.  The same guy who created a veritable replica of Venice, Italy in the middle of the desert, who created the Comdex computer tradeshows and hosts the Blue Man Group night after night, used to be a court reporter!  Wow! 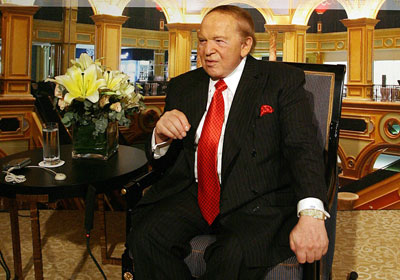 Sheldon Adelson went to school to become a court reporter in his late teens.  He then joined the Army where  his assignment was to report appeals board hearings.  He recalls one particular hearing for which he took down the testimony of some scientists whose clearances had been revoked during the McCarthy era, ...every one of [the scientists] had the same story.  They went to soirées, and the conversation consisted of why they were here on earth. And I said to myself, These guys are . . . the greatest scientists in history, and theyre asking themselves, Why are they here on earth? . . . This is the most ridiculous thing I ever heard of. There have been countless billions of people that have lived since the Neanderthal man, and not one person has ever found out why theyre here on earth, with any degree of certaintydont they know that? 
The Secret Inner Conversation Of A Court Reporter
Ah, which court reporter can't relate to that?  You're writing away and the witness is describing some fact on this or that and there is this inner dialogue going on within you.  What are they talking about? I can't believe that.  I need a bagel.  Not too many people can believe it, but a court reporter can be doing their job flawlessly -- getting every single word -- and be elsewhere in their imagination completely lost in thought.  The witness maybe going on about minute details of their testimony, and the court reporter may be thinking about their dry cleaning.
I digress.  Back to the World's Richest (Former) Court Reporter, Sheldon Adelson
He spent several years working as a court reporter.  Back in his day, they called it a teletype operator.  Adelson says, [Being a court reporter] ... that sort of self-made me, I mean self-educated me. And then I spent two years in the United States Army and I worked as a court reporter in the Judge Advocate General department, which was the legal department of the Army. And then I went on from business to business. If I added up all the businesses that I have been in over the 59 years of doing business it comes to more than fifty.
While there are many, many ways of measuring success -- wealth being only one -- most of us are probably not interested in becoming gambling hotel barons.  Still, it is rather inspiring that one of our own has reached such incredible heights.  And if I ever meet Sheldon Adelson, Court Reporting Billionaire, I'll ask him one simple question, Can I get my five bucks back?
My sources: www.cnn.com, www.newyorker.com
Friday, June 27, 2008

Comment by Stena | Sunday, August 3, 2008
Cool
Who knew! Todd now that`s what i call inspiration! Oh and thank GOD they changed the name . Some would argue were already now taken so seriously in this profession. But to still be called Teletype Operator Would definetly leave room for some creative thinking on your business cards. :)
Comment by Gregory R. Adelson | Tuesday, September 2, 2008